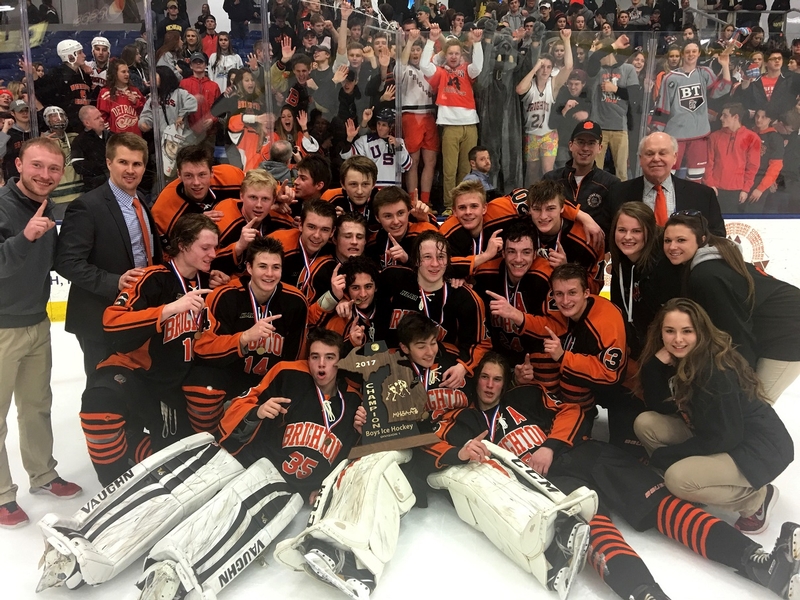 The win gives the Bulldogs its fourth title in program history, and fourth under legendary coach Paul Moggach.

“I’m honestly just along for the ride. The players win the games and put in the tremendously hard work, and sacrifice a lot to get here and win a title,” a humble Moggach said.

“They put the time in and do what other teams won’t. That’s why we have a good program. These guys love each other, and play for each other. That’s what it takes to win a state championship.”

The Bulldogs’ (24-6-1) speed and ability to create turnovers left those in attendance silent as Brighton jumped out to a two-goal lead in the first period with goals coming a minute a half a part.

Senior Keith Wikman put Brighton up 1:52 into the first period after he received a crossing pass from senior Joey Martini. Wikman ripped a shot from the left circle for a 1-0 goal.

Soon after, Adam Conquest intercepted the puck in the neutral zone and raced it to the Shamrock zone and fired a shot. As the puck caromed to the left, senior Spencer Gehres quickly followed the play and put in the rebound for a 2-0 lead.

“It felt great, hearing nothing but our fans. Everyone on the bench went nuts and we were just excited to get that lead early on,” Brighton forward Jake Crespi said.

“Nobody was expecting it,” Conquest added. “We wanted to steal that momentum.”

Catholic Central (22-8-1) couldn’t muster any offense until there was seven minutes left in the first period when CC registered its first shot on goal.

“If we could take back those first few minutes of the game, it was a whole different hockey game,” Catholic Central coach Brandon Kaleniecki said.

“But they jumped us good, and got the lead.”

At the start of the second period, the Shamrocks started with a power play, but it didn’t go according to plan. Conquest (goal, two assists) received a quick pass from junior Brody White and put away a short-handed goal for a 3-0 lead 43-seconds in.

“When I’m in the neutral zone, I’m always looking to pick off a pass and go. I’m determined to play my position, swoop low and force the defense to make bad plays,” Conquest said.

The Shamrocks wouldn’t be held off the scoreboard taking advantage of another power play when senior Brendan West scored a wrap around goal that cut into the lead 3-1 with 10:59 left in the second period.

The ice began to tilt back in Catholic Central’s favor behind West’s play. The junior did what he could to keep it a game, including pressuring the crease on a bobbled puck that he put away to bring the Shamrocks within one, 3-2, in the third period.

“After a while we finally found our legs and found our game. The guys began to settled down and the nerves weren’t a factor anymore. From that point on we were a pretty good team,” Kaleniecki said

“We had a lot of faith we’d get that third one, and tie the game up. We just suffered a back breaking goal.”

Moggach noted after the game that this team had to battle and weather some storms in the form of illness, and injuries to make to USA Hockey Arena. And the Bulldogs battened down the hatches and weathered another in CC’s pressure.

The ice turned back in Brighton’s favor when Gehres got his second goal of the game when Conquest fired a shot towards the net, while Gehres stood by. As the puck barreled down on him, he lifted his stick up, and deflected it for a 4-2 lead.

“I just got lucky. I don’t know what else to add,” he said modestly.

Brighton settled back down and played their game again, and kept Catholic Central scoreless the rest of the way. Crespi added an empty net goal with 1:08 left in the third period for a 5-2 lead.

Kaleniecki added after the game that despite losing tonight, he’s extremely proud of a team that had mostly new players come in and live up the program’s legacy and improved throughout the year.

“They worked incredibly hard. We lost seventeen players to graduation, and another because he moved. Five guys from last year’s team returned the other twenty were new faces,” he said.

“The progress they made, and to where we finished. I would have liked for us to finish this one off. But for us to finish a couple of goals short of a state championship, we have nothing to hang our heads about.”

Editor’s Note: Remember to watch the highlights from this game and all of Saturday’s Hockey State Finals on the STATE CHAMPS! HS Sports Show, Sunday morning at 9:00am on Fox Sports Detroit!