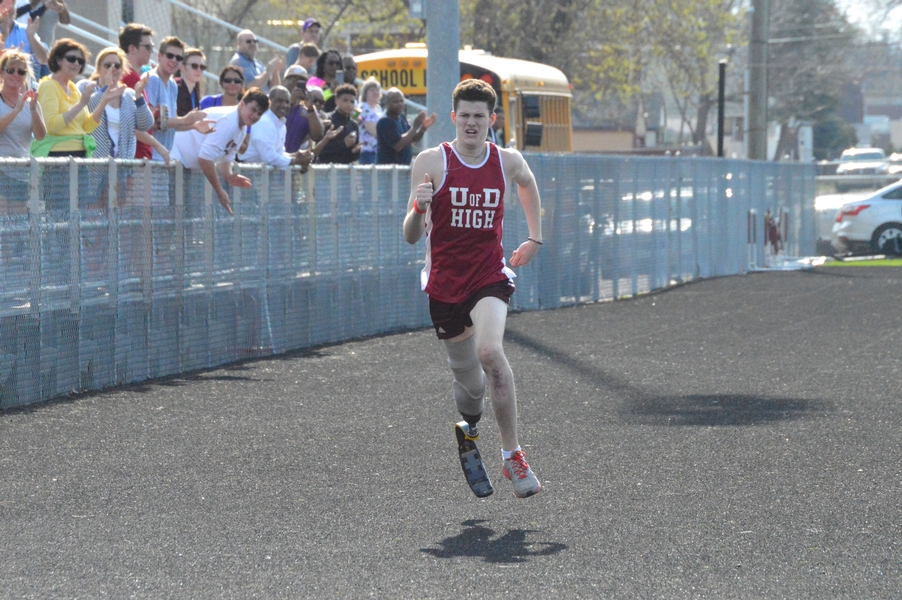 Detroit – To say that Wednesday’s emotional run was the race of Sean English’s life would diminish the interminable marathon his life’s already been put through.

It wasn’t even the finish line. More like a brand-new start.

Thirteen months to the day of the roadside accident that took his right foot, English took part in his first — and last — high school competition this season, running the 400-meter dash at U-D Jesuit’s double-dual track meet with a prosthetic running blade.

“This was insanely emotional, finishing my career where my dad started his,” said English, who was wearing his father Sean’s U-D jersey from the mid-1980s. “I told everyone I would do it, but I’d do it all over again. This pain I’m feeling right now is the best pain I’ve ever felt in my life. I’m so happy to be able to say that I did it. There’s no ‘He WILL run again,’ it’s ‘He DID run again.’ I’m blessed to say that I can do that and that I finished the race. That was my one goal. I did that, and I think I did it with flying colors.”

The 2016 Catholic League champion in the 1,600, English, a senior, lost his foot when he was hit by a passing car after his family stopped to help six teenagers from an overturned vehicle on I-96. After the accident, he opted for a below-the-knee amputation of his badly damaged right leg, in the hopes that he could eventually return to competitive running. He has spent the last 13 months taking small steps in that direction — taking his first steps in July, running for the first time in December — determined to make his vow of running again come true.

“There was a lot of points where — I didn’t say ‘I don’t know if I’ll make it back,’ but ‘I don’t know if my doctor will let me make it back,’ because I will do anything unless somebody tells me not to do it. I definitely toe the line. But luckily, everyone said yes. They said ‘Go live. Go for it. You’re ready. You can do this,’” English said. “Monday, I was at an event, and I called somebody, and said ‘Can we make this work?’ And we said yeah, we can do this. I called my doctor, and said ‘Am I allowed to run?’ And he said yeah. So I figured I was good to go. It was my goal to be able to run at U-D, and didn’t know if I was going to be able to do it, but found out that today was the perfect day.”

It helped that his orthopedic surgeon, Dr. Joseph Hoegler, believed enough in his young patient that he brought back a “Boston Strong” T-shirt after running the Boston Marathon as motivation for English.

English had his own motivation, too, running for the memory of Dr. Cynthia Ray, another Good Samaritan who was killed when the second car crashed into the accident scene.

“I’m so happy, not only for myself, but I did that for Dr. Ray. I get really emotional when I talk about that. But Dr. Ray lost her life, and I know that she would want me to run again, so I was happy that I was able to do that in her honor,” English said. “It’s been about a year since she passed, but her life will always touch our hearts for the rest of our lives. Always remembering her name is why I work every day.”

Through the first 200 meters of Wednesday’s race, it was just like riding a bike for English, who strode along with a huge grin on his face. At the halfway mark was when the debilitating pain hit — pain that could’ve made him stop running, had it not been for the incredible support from everyone at the track.

“Honestly, there’s a high chance I could’ve dropped out of that race, I was feeling so much pain. I couldn’t even get away from (the crowd), I couldn’t slow up for a little bit, because everywhere I went, somebody was there, whether it was cameras, teammates or opponents that run against me. I got to that first stretch and O-Lake, Orchard Lake St. Mary’s is right there, cheering me on. I got to that turn, and I saw every color, every camera possible. Honestly, it was amazing. If it wasn’t for everyone here, and everybody supporting me — not just today, but throughout this whole experience — I don’t know if I would have finished,” he said.

“It was a whole year of my life flashing before my eyes. It was amazing. I go to school here, and I started the school year in a wheelchair, ended up walking, and I finished the year running.  Tomorrow’s my last day of school, and I might have to return to the wheelchair. I can’t feel my legs, which is good and bad, because I know eventually I’ll wake up in the middle of the night and think ‘Wow, I actually ran today. And I can feel it.’ I’ll feel it tomorrow, trust me.”

He crossed the finish line to the cheers of the entire crowd, hugs from both parents and a few opponents and teammates, and a prom-proposal from his girlfriend. His time of 1:19.36 was a personal record with the prosthetic blade, bettering his previous best run in a recent Paralympics event.

Thursday is English’s last day of school. Prom is coming, followed by summer vacation, and then off to Purdue University, where he will study both business and communications, with an eye toward sports broadcasting.

But Wednesday wasn’t the end of anything.

“It’s never over. It won’t be over until I’m pain-free, and I probably won’t ever be pain-free,” he said before the race. “It’s definitely not the finish line. Once I cross that finish line, then I’d say my running career’s just starting.”