Kent City adjusts to Breslin, shoots way past Calumet in second half 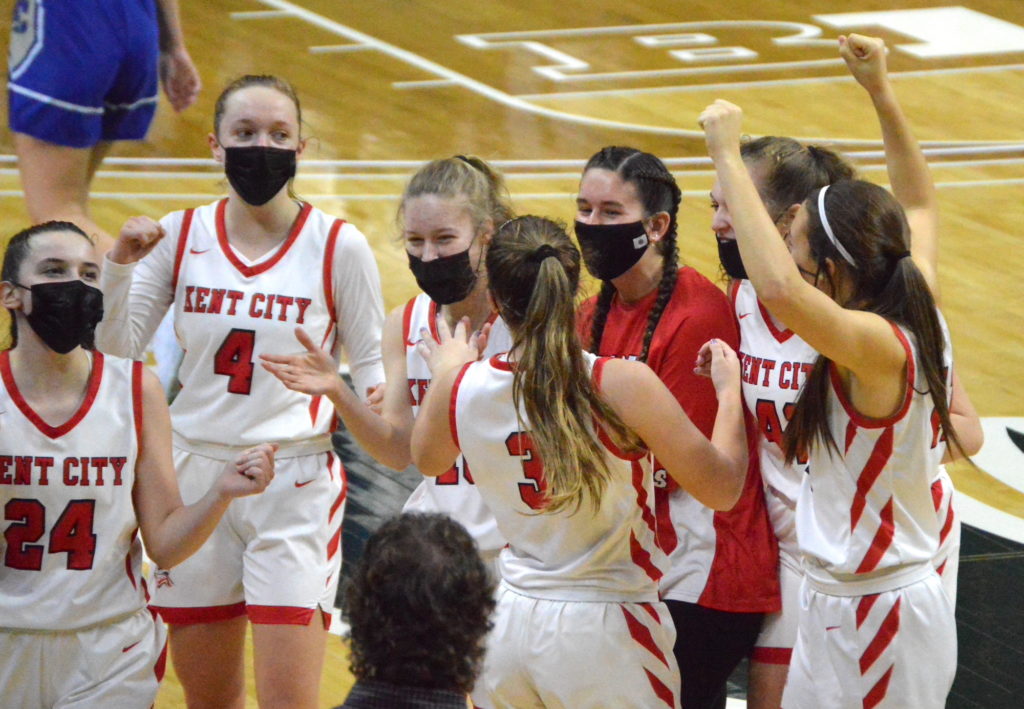 EAST LANSING — It took a while for Kent City to get used to the big gym, playing in Michigan State’s mostly empty Breslin Center.

Once they did, they were able to pull away from a feisty Calumet team, winning 59-53, in Wednesday’s Division 3 semifinal game, securing themselves a spot in the finals.

“They’ve led us since they’ve been little girls, and we’re living the dream today, because we’re heading to the state finals. That’s what the goal was,” Kent City coach Scott Carlson said, nodding at captains Kenzie Bowers and Jenna Harrison, who accompanied him to the postgame press conference. “We’re excited. We’ll probably shoot a couple of 3s. They will, too. I’m guessing it’ll probably be an up-and-down game.”

The Eagles (21-0) move on to their first-ever title game appearance on Friday, taking on Grass Lake (19-1) at 3 p.m. The Warriors got a forfeit win over Hemlock in the other semifinal, when the Huskies (14-9) had a player test positive for COVID-19.

Kent City is hoping the fact that the Eagles have played on the Breslin floor now, and the Warriors haven’t is an advantage in their favor. “I think it’s a huge advantage. The first time on the floor, it’s cool to be here. And I think it took us the entire first quarter, if not the first half, before we found ourselves and started playing. Other than Lexie Bowers. Lexie Bowers found herself the minute she stepped on the floor, with 3 after 3 after 3. Basically kept us in it in the first half,” said Carlson of the Eagles’ 23-percent first-quarter shooting.

The third quarter was decisive, when the Eagles shot 56 percent from the floor and 4-for-9 from 3-point range, blowing open a game that had been a two-point lead for the Eagles, 24-22, at the half.

“We know it’s coming. I think teams that have scouted us know it’s coming. In the end, it evens out,” Carlson said. “The first half, we didn’t make a lot of 3s. We had some great looks, then it got rolling. Once that momentum starts, it’s tough to stop.”

“We always know it’s going to even out. We kept missing shots in the first, the first quarter, we’ve got the second quarter, the third quarter, the fourth quarter,” said Kenzie Bowers, the Eagles’ all-time leading scorer. “That’s what happened. We were able to get a win, because we were able to hit some shots second half.”

Calumet (20-1) didn’t mind the pace, but didn’t have answers to stopping Kent City with its zone defense.

“No, we like to play fast. We got a little loose, and defensively, we got sloppy. Just execution,” Calumet coach Matt Laho said. “Yeah, it’s easy to make shots when nobody’s guarding you, right? We just had some bad slides, bad rotations, girls out of position, gave them some open shots. … Obviously, it was a tough game, didn’t end the way we wanted it to. They executed better. That’s kind of the story.” The Eagles pushed the lead as high as 11 points less than two minutes into the fourth quarter, then began to stall, running time off the clock, and forcing Calumet to foul. Kent City still left the door open, though, with a few uncharacteristic turnovers, as well as four missed free throws in the fourth.

“We missed too many, didn’t we? I was thrilled to get to the double-bonus, so that we knew we’d get one of two. Yes, we’d like to hit those, and take that 10-point lead to 15,” Carlson said. “It was a big enough lead, and my girls are good enough ball-handlers, and they made the shots when they needed to, down the stretch.”

Calumet got a 3 by Jana Loukus with 3:52 left, then a quick steal on the inbound and a layup by Marybeth Halonen to cut it back to six, 54-48 with 3:37 left. The Copper Kings cut it to four on a layup by Lizzie Torola with 1:40 left, but Kenzie Bowers made two free throws 11 seconds later to pump it back up to six, 56-50. Djerf cut it back to four again, 57-53, with a 3-pointer with 40 seconds left, but a heady play by Kenzie Bowers, poking the ball away after a turnover, before it could result in a fast break the other way. The ball eventually made its way to Harrison, who hit two free throws with 24 seconds left to push the lead back to six, where it would stay. Djerf led all scorers with 22 points for Calumet, while Halonen had 11.

“She’s a great player. She’s been a great player for us all year,” Laho said. “We needed some people to step up with her. Unfortunately, we didn’t get that tonight. But she did her best to carry the team on her back today.”