NorthPointe Christian bounces back from shaky start to defeat Boyne City, 48-45, in a Class C semifinal 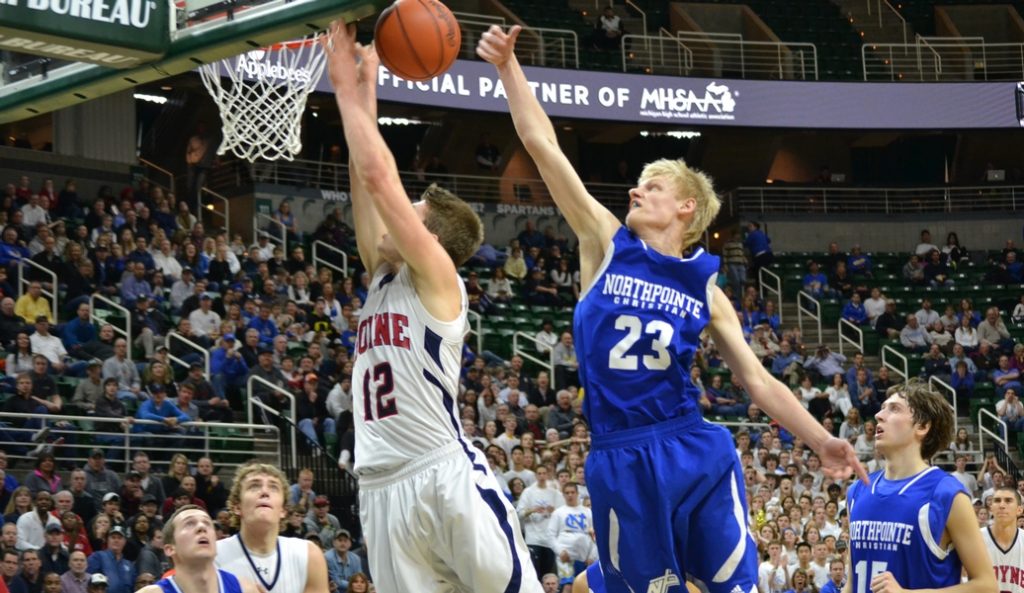 East Lansing – As Grand Rapids NorthPointe Christian’ 12-point lead dwindle down to just one point. With its offense failing to find a rhythm down the stretch, it was the Mustangs’ defense that answered the call in a Class C semifinal on Thursday against Boyne City.

With just over a minute left to play and NorthPointe clinging to a 46-45 lead, Andrew Holesinger came up with a key block to keep his team out in front.

But after Boyne City’s Corey Redman returned the favor with a block of his own, NorthPointe senior point guard Preston Huckaby gave the Mustangs yet another key defensive stop as he drew a charge with 21.2 second left and, after a pair of late free throws, NorthPointe held on for a 48-45 win at the Breslin Center.

NorthPointe coach Jared Redell said that both were key defensive plays from his seniors and added that his team’s defense is something that the Mustangs focus their attention on all season.

“Those are two huge defensive plays,” he said. “We pride ourselves defensively as a team and Preston drew a huge charge and Andrew had a huge block there and it was a really tough game for Andrew being in foul trouble. It was tough for him to get in a flow, and he’s been our rock at point guard and Preston has been our leading scorer and I told him on the way in here that the good news is that it’s not how you’re finishing your season.”

Huckaby’s basket to open the fourth quarter, it was Huckaby that gave the Mustangs their largest lead, 46-35. But that would be NorthPointe’s final field goal.

Boyne City (21-6) then rattled off the next 10 points, including five from senior Cole Butler that would have the deficit trimmed to one point with under two minutes left to play.

Boyne City coach Nick Redman said that he felt in order for his team to have a chance to come back in the game, it would have to pick up the pressure defensively to prevent NorthPointe from stalling and try to generate more turnovers.

“We knew that when we got down a little, we had to pressure them a little more because they’re good at spacing it out and using the clock,” he said. “So we knew to give ourselves a chance, we had to extend the game and get as many possessions as we could. So we tried keeping it out of (Huckaby’s) hands and pressure as much as possible and start to foul down the stretch just to give us a shot.”

Butler finished with 16 points and 10 rebounds to lead the Ramblers.

In the third quarter, Huckaby picked up right where he left off as accounted for seven straight NorthPointe points at one point to give his team a 36-30 lead midway through the third.

Huckaby said he knew he needed to be more aggressive after the third quarter and as he took over the point guard position when Holesinger got into foul trouble he felt the need to do so even more.