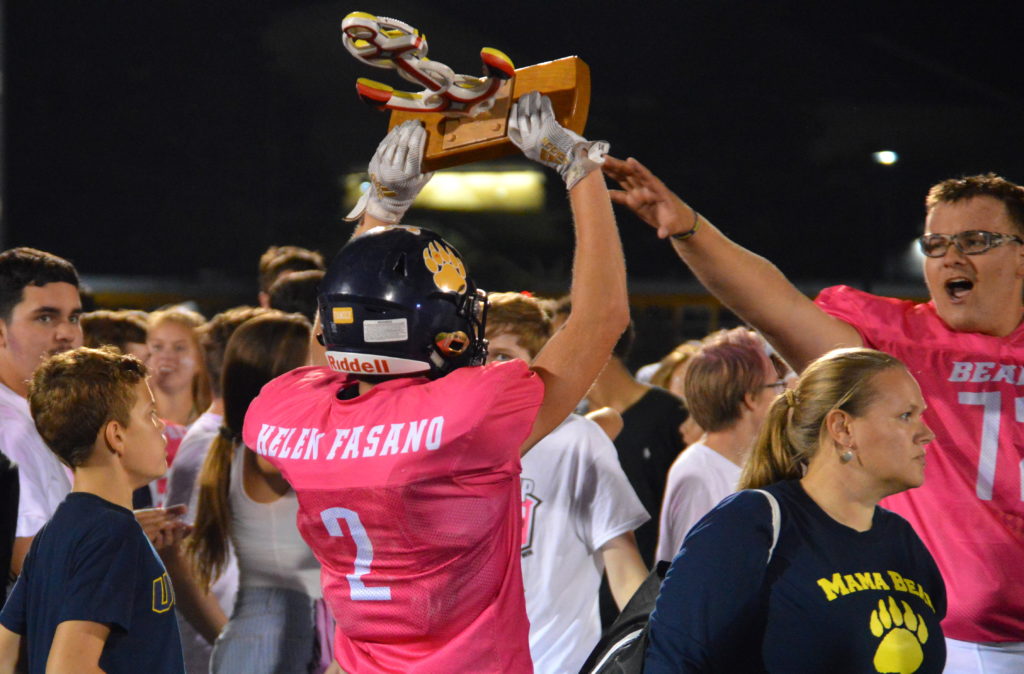 ST. JOSEPH — The Anchor had been gone so long, some younger kids in the St. Joseph football program might not have had an idea of what it was.

The traveling trophy originally created a decade ago to celebrate the 50th game in the rivalry between the Bears and neighboring Stevensville Lakeshore, it hadn’t resided on the northern end of Cleveland Avenue since 2013.

But after St. Joe’s 22-14 win over the Lancers Friday night, snapping an eight-game losing streak in the rivalry, the Bears get to drop the Anchor in their own trophy case for the first time in forever.

“Oh, yeah, it’s amazing. We’ve been looking forward to this for years. I was a part of three different games where we lost — they were all nail-biters — but I’m so happy we pulled this off,” said senior running back/linebacker Konner LaVanway. “Oh, Lord, it was a great time.”

The win didn’t come without some adversity, as the Bears — who went to 4-0 for the first time since 2013 — lost their starting quarterback to a shoulder injury in the first quarter, and had players cramping up left and right in the heat and humidity, forcing backups into the game at key moments.

“Apparently we don’t drink enough water. We’ll work on that,” joked junior quarterback Troy Pratley, who was hurt on a first-quarter strip sack. “I was so proud of them. I just kept telling. them, ‘Guys this is your moment. Next man up, this is your moment. Put it in the end zone, and we’ll seal this game.’ Our defense really helped us out. I don’t even have words right now. I’m just so proud of all the kids and all the coaches, and our fans. The atmosphere was insane.”

Pratley ripped off a 77-yard run on the first play from scrimmage for the Bears (4-0, 3-0 SMAC West), and Brent Huff added a 34-yard field goal two possessions later to give St. Joseph a 10-0 lead, but that would be all the offensive points the Bears would muster in the game, as they settled for a game of field position and ball possession in the second half.

“Any time your starting quarterback goes down, I think your game-plan goes out the window. At that point, it was ‘Let’s milk some clock, slow the tempo down, and see if we can keep our defense fresh, and hopefully make some plays,’ and they did,” St. Joseph head coach Andrew Pratley said.

“It was just a great team effort. Obviously, off to a great start offensively, had our quarterback go down, and so kids had to step up. Got a defensive touchdown and a special teams touchdown. That’s a complete-game effort right there, so gotta be proud of the kids. …

“I think that’s what we talk about a lot with our kids. Bad things are going to happen. They practice, too. They’re a good football team. You gotta respond. You can’t get down. It’s a life lesson. If you get down, you gotta fight back up right away. We did that tonight, when our starting quarterback goes out, and our back-up kid (Andy Blomgren) comes in, and does a good job, leads our team to victory.”

The defense responded with four interceptions and a fumble recovery, turning one of the turnovers into instant points when LaVanway returned his pickoff for a touchdown.

Griffin Shinrock returned the opening kickoff of the second half 90 yards for a score to extend a 10-7 lead at the break out to 16-7, then LaVanway’s 56-yard interception return made it 22-7 with 10:08 left to play.

“Oh, that was probably the best time of my life so far this season. Getting into that end zone was … a dream of mine. A pick-six? First of my career, so I’m happy,” said LaVanway, who was lurking in the flat, following the eyes of Lakeshore quarterback Jimmy Gillette, a former teammate. “A little bit of both. Jimmy and I go way back. He’s a great quarterback, for sure. I’ve caught for him multiple times. He’s a great quarterback, don’t get me wrong, but it was just the better player caught the ball.”

With the Bears trying to milk the clock, LaVanway had to sub in several times for starting back Jeremiah Sterling, who kept cramping up and having to leave the game. Between the two, they accounted for 126 yards on 29 carries, as St. Joseph racked up 248 yards on the ground.

“I mean, it was really frustrating, especially when my team needed me the most. It was kind of hard for me, getting in to play, and then keep going out. But I have amazing teammates by my side, and they did everything for me,” Sterling said. “The guys went out and fought. We fought for each other, we battled the whole game.”

Gillette tossed a 23-yard touchdown pass to Logan Miller to make it a 10-7 game early in the second quarter, then had Lakeshore in position for a potential go-ahead score just before the half, only to have Brennen Kerns thwart the threat with an interception in the end zone.

Sophomore Malik Immoos also had an interception, while Shinrock closed out the game with a pick with 40 seconds left.

It was still a game before that, though, as Lakeshore capitalized on a fumbled snap with 6:05 left to play, cashing in two plays later on a 2-yard scoring dive by Zeke Rohl.

Gillette finished with 232 yards passing, but the Bears limited Lakeshore to just 26 yards on the ground.

Shinrock’s interception allowed St. Joseph to kneel out the remaining seconds on the clock, before the student section rushed the field, and the Bears paraded the reclaimed Anchor trophy through the mob.

After the weekend, the trophy will go in one of two display cases outside the athletic office inside St. Joseph High School.

It hasn’t been there in quite a while.

“It hasn’t. I was a freshman coming up, and I didn’t even know what the anchor was. We haven’t beaten them in so long,” Sterling said. “It was just a blessing that, in my senior year, we could go out and get the ‘W’ — and not just me, my whole team, my teammates, my family, the community — we did it for them. I’m really happy.”

For Troy Pratley, it was something he’d only heard about.

“I’ve heard. I’ve heard. I got to kiss it for the first time, and that felt pretty good. I’m excited — beyond excited right now,” the junior said. “It’s crazy. I couldn’t have asked for a better start. Obviously unfortunate for me, but the team’s rolling, and that’s what it’s about. I’ll get healthy sometime, but right now we’re rolling, and we’re going to keep rolling into next week.”

The Bears go out of conference next week for a homecoming tilt against Kalamazoo Loy Norrix, but the first-year coaching staff knows that the hot start doesn’t mean anything unless the Bears keep adding to it.

“It’s great. It’s great for this community to have this win. It’s been a long time coming. We gotta build on it. Obviously, we’re not satisfied with where we are — 4-0 doesn’t do anything for us,” said Andrew Pratley, who was hired in February, after taking Holland and Ogemaw Heights to eight playoff appearances in 15 seasons over his last two stops. “I tell you, it’s really big for our seniors. It’s something they’ve been talking about for a long time. As much as we try to make it ‘just another game,’ obviously to them, in the back of their mind, they knew what it was for them. So I feel really good for them.”