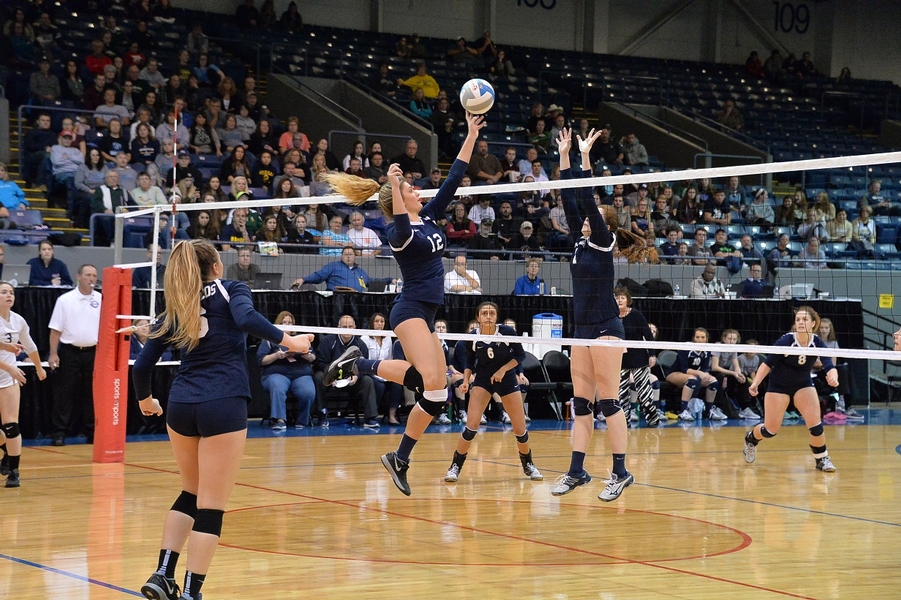 Abby Cole remembers the deciding factor in her decision being connected to wanting something new.

It had nothing to do with burnout, the need to conquer new challenges or which sport would lead her to the next level.

While the former Grand Haven basketball and volleyball player excelled in those sports from an early age, her first love by the time she got to middle school was tennis. She first competed in basketball as a 6-year-old in a YMCA league before flashing a growing talent for volleyball by the time she was in the sixth grade. By her middle teen years, it was apparent Cole was eventually going to have to make a tough decision which sport would help get her to college.

Tennis eventually fell by the wayside as Cole grew to an imposing 6-foot-5 by high school. Her next favorite sport was basketball, where her combination of height, athleticism and talent attracted the interest of Division I coaches. The only problem was that having played the sport since the first grade, Cole’s interests began wandering in a different direction.

It was volleyball that eventually won out as Cole committed to the University of Michigan in the summer prior to her junior year at Grand Haven. She continued playing basketball and led the Bucs to back-to-back Class A championships in 2012 and ‘13. But her heart had been won over by volleyball.

"I just leaned toward volleyball," said Cole, named Associated Press Basketball Player of the Year in 2013, who went on to become a two-time All-Big Ten volleyball player. "I always played basketball and I loved it. Volleyball came on a little later and it was new to me. I think that was the draw to me.

"I’ve always said the two sports complimented each other well for me. Basketball helped me become more physical and volleyball helped me with finesse. If I hadn’t played both, I wouldn’t have been the same athlete I became."

Cole’s decision to pick volleyball over basketball is an example of what is happening in both sports at the high school level. It’s a trend so striking, one that could be detrimental for girls basketball, that no one disputes it. While it’s not necessarily proven by overall participation numbers, coaches say that volleyball is winning the battle in attracting, like Cole, the elite athletes.

Granted it’s a tough trend to prove, but let’s start with the numbers that can be quantified. According to the Michigan High School Athletic Association, participation numbers in both sports are dropping faster than the state’s population rates, with the specialization of today’s high school athlete, and the swap of seasons in those two sports 2007-08 likely playing significant roles in those statistics.

For instance, in the last season of fall basketball (2006), 19,140 competed in that sport versus 21,545 volleyball players. A year ago, the MHSAA reports 19,067 competed in volleyball to 15,896 in basketball. Translated, that simply means basketball has lost players at a greater rate than volleyball.

One of the questions is, where are they going?

From there you can argue the rest of the evidence of volleyball’s growing popularity with top athletes is anecdotal. At least to a point. Since there is no arguing with the MHSAA’s figures, wouldn’t it follow that if girls basketball teams have indeed lost players that one of the fallouts would be that there are less talented teams, as a whole, particularly if the sport was losing some of the cream of its talent? And if there is less talent, a point few coaches argue, wouldn’t that be reflected in the success of West Michigan girls basketball in terms of state championships?

Okay, so let’s look at that.

With seven runner-up finishes since 2003. In basketball, toss out Grand Haven’s pair of titles and only two teams – Grand Rapids Catholic Central in 2010 and Hudsonville Unity Christian in 2006 – have won state titles.

Clearly, something is providing volleyball with an edge over basketball on the west side of the state.

And one of those theories is a growing sentiment among coaches that volleyball is simply getting better athletes. While it’s not necessarily true that girls basketball programs are scrambling to fill out 12-player rosters, it is becoming increasingly common for schools to drop freshmen basketball or have fewer than 10 players on junior varsity teams.

Getting back to those Grand Haven teams, consider this. Bucs coach Katie Kowalczyk-Fulmer points out that of the 12 players who were part of her 2012 team, six played volleyball. Two years later no athlete competed in both sports.

Like many coaches, Kowalczyk-Fulmer doesn’t have all the answers as to why. She tried to tailor her program to accommodate volleyball’s winter and spring club seasons. But at some point, a high school girls basketball coach has to run a program which best suits itself, not another sport.

Kowalczyk-Fulmer said there is little doubt that teen-age female athletes are seeking something other than basketball. Kowalczyk-Fulmer has been at Grand Haven for 20 years and said that she used to see more than two dozen players try out for the freshmen team. Now she’ll have 15 or 16 on good years.

"Girls are choosing a little earlier now. I don’t mean its woe on us, but it would be nice if we could share more," she said.

Former Unity Christian basketball coach Scott Soodsma said he can’t definitively answer why volleyball seems to have gained the upper hand in attracting top athletes. He said the season change, teenagers’ social schedules, an over saturation of basketball in the winter, the popularity of volleyball and the availability of volleyball scholarships have combined to woo girls to that sport.

"I can’t tell you why the level of play has dropped, but there is no doubt it has," Soodsma said. "Girls in the sixth, seventh or eighth grade who haven’t started are looking for other options. So you’re actually practicing against lower competition."

"I don’t have all the answers," he said. "You can’t play basketball all day. It takes more time. Is that a factor for girls? I don’t know. It’s hard to say. I just don’t know and I don’t know if anybody does."